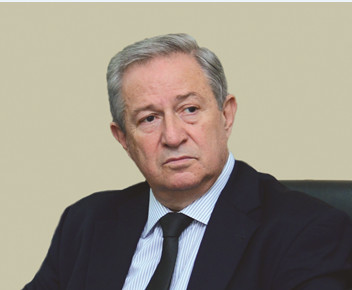 Dilgam Tagiyev was born on January 6, 1950 to a family of a doctor. In 1966 entered full-time chemistry faculty of Azerbaijan State University (now Baku State University), sho­wed interest for scientific researches in student years and published his first scientific work in 1969. He made speeches in students and post-graduate students’ conferences held in Tartu, Minsk, Tbilisi and Novosibirsk, and was awar­ded the first and third degree diplomas, honorary certificates. Being an honor student he also actively participated in the public life of the university, in 1968-1970s he was the chairman of Student Scientific Society, bureau member of University komsomol committee, member of Baku komsomol committee, representative of XXVII congress of Azerbaijan komsomol.

In 1974–1984s he worked in the positions of an engineer, junior and senior resear-chers at the Institute of Inorganic and Physi­cal Chemistry of AS of Azerbaijan (now the Institute of Catalysis and Inorganic Chemistry), performed research works on catalytic pyrolysis and hydrogenation, oxidizing dehydrogenation of various hydrocarbons on zeolite and silicate catalysts. In 1983 he was awarded one of the pres­tigious awards in USSR All-Union Lenin Komsomol Prize for the results of these studies.

In 1984 Dilgam Tagiyev defended doctoral thesis in Moscow at the Scientific Council of the Institute of Organic Chemistry of AS of USSR. Then in 1985 he worked in the positions of head of group “Complex compounds”, labo-ratory head at the Institute of Inorganic and Physical Chemistry of AS of Azerbaijan, in 1986–1991s he was deputy director on scientific affairs, in 1989–1991s he was appointed an executive director of “Zeolite” Inter-branch Scientific Technical Complex. In 1990 he was granted a title of a professor.

In 1991 working at the Institute of Inorganic and Physical Chemistry of AS of Azerbaijan Dilgam Tagiyev was also elected a professor of General Chemistry chair of Azerbaijan Medical University, in 1993–1995 he served as a dean of pharmacy department, in 1995 he was elected head of chair Biophysical and bioorganic chemistry. Dilgam Tagiyev who always relates pedagogical activity to scientific investigations. From 1999 headed the laboratory “Heterogeneous catalysis” on the invitation of directorate of the Institute of Petrochemical Proces-ses of ANAS.

Scientific activity of Dilgam Tagiyev has been devoted to the development and study of the mechanism of influence of heterogeneous and homogeneous catalysts for hydrogenation, oxidation, isomerization, alkylation,  oxydehydro­­genation, oligomerization and other reactions of various class hydrocarbons and their derivatives, synthesis and research of biologically active metal-complexes, study and modeling of some physical and chemical processes.

Dilgam Tagiyev first showed high activeness of zeolites free of transition elements – non-traditional catalysts for redox type reactions olefins in hydrogenation, hydroizomerization, and different hydrocarbons in  oxydehydro­genation reactions; detected new conversions of alkyl naphthenic hydrocarbons on zeolite catalysts and named them oxydehydrodisproportionation and oxydehydroisomerization reactions. He pro­posed a new express method for calculation of diffusion coefficient based on thermodesorption measurements which is an important factor in studying the kinetics of different reactions in micro porous catalysts.

He performed hydrothermal synthesis of zeolite like crystalline gallium, iron and zinc phosphates, defined their structural properties and high catalytic activity in the conversion of methanol. For the first time he showed the possibility and perspectives of using zeolites as an additive which increases the effectiveness of an electrode material in photoelectrocatalytic decomposition of water. He created new zirconium-zeolite catalytic systems free of valuable metals for joint conversion of normal paraffines with methanol and low-temperature isomerization-disproportionation reactions of straight distilled gasoline to produce high-octane gasoline components and studied the mechanism of their effect. He developed new catalysts for the production of aromatic hydrocarbons from other low-molecular paraffins and oxidizing dehydro­cyclization of benzene to methane and studied the nature of active centers by different methods. He determined selection principles of zeolite and ferrite catalysts to synthesize valuable isomers of cresols, xylenols and different alkyl­phenols by alkylating phenols and cresols with methanols and other ethers. He performed thorough researches on the kinetics and mechanism of oxidizing ammonolysis reaction of different substituted derivatives of o-xylene on complex oxide catalyst, and determined the main factors in the formation of nitriles, dinitriles and imides.

He synthesized new metal-complexes and heteropolyacid catalysts for di- and oligomerization of C2–C8 olefins under mild conditions, developed a new technique for immobilization of nickel complexes on a solid carrier. For the first time he found a relation between catalytic activity and stereochemical rigidity in nickel thiopyrazolaldiminate complexes. He synthesized different nanogels comprising nano silver particles for immobilization of them to reduce toxic effect and increase action time of different medical preparations (doxorubicine, trypsin, doxycycline, thyroxine) and developed polymer carriers for delivery and controlled separation of medical preparations.

A separate article was dedicated to the scientific investigations of Dilgam Tagiyev in journal “Science in the USSR” (1985, №5) published in many languages and primarily intended for foreign readers. The results of studies on oxydehydrogenation reactions on zeolites were included as one of the important achievements in Jubilee Meeting of Presidium of USSR Academy of Sciences (October, 1987)  (Herald of  AS USSR, 1987, №12). In the world exhibition of young inventors held in Bulgaria the catalyst presented by D.Tagiyev was registered with a diploma (1985).

In 2007 Dilgam Tagiyev was elected corresponding member of NAS of Azerbaijan on a specialty “Petrochemistry” and in 2010 he was appointed a chairman of Problem Council on scientific direction “Catalysis” of Organization and Coordination Council of Republican Scientific Researches. On April, 2013 according to the resolution of common meeting of NAS of Azerbaijan he was appointed academician-secretary at the Department of Chemical Sciences and member of the Presidium of ANAS.

(125 of them are journals included into Web of Science database).

For 2019–2022 in European Union Horison 2020 International Grant Competition on the recommendation and invitation of Institute of Research on Catalysis and the Environment of Lyon and SINTEF Fund of Norway Dilgam Tagiyev in the international group became the winner.

At present Dilgam Tagiyev is vice-pre­sident of NAS of Azerbaijan, director of academician M.Nagiyev Institute of Catalysis and Inorganic Chemistry, editor in chief of “Azerbaijan Chemistry Journal”, member of editorial board of “Transactions of NAS of Azerbaijan”, “Proceedings of National Academy of Sciences of Azerbaijan”, “Science world” journals, and “ELM” newsletter, member of Republican Research Coordination Council, Member of the Observatory Council of High Technologies Park of ANAS, chairman of the Presidium of ANAS related "Anti-Pseudo­science Commission"